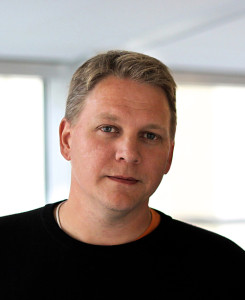 My dissertation in Media and Communication Studies, published in 2014, analyzed the self-images of Swedish local newspapers between 1920 and 2010. It contributed to the study of the media history of the press by analyzing how local newspapers have articulated what they are, what they do, how, why and for whom from the time of the modernization of the press after the First World War to the changing media landscape of today.

Currently I am involved in a project on the role of the aerial perspective in climate communication, with a particular focus on representations of Nordic landscapes. My colleague Jonas Harvard from Mid Sweden University and I are studying the interaction between the aspects of distance and presence in aerial photography. On the one hand aerial views can provide a sense of larger context and understanding of environmental issues. On the other, there is a risk that aerial views contribute to a sense of remoteness, due to the distance from the subject and the often abstract nature of the shots. The prevalence of Nordic/arctic imagery in climate reporting can also reinforce the impression that climate change is happening “elsewhere”. The increasing use of satellite imagery and maps by the media in climate reporting, as well as the development of camera-equipped drones, which has made the aerial perspective more easily accessible to photographers, provide important backgrounds for this project. The study builds on our previous work on the subject of aerial views in communication. In 2019, we organized an international conference on the role of media technology and the use of drones in journalism: “Journalism from Above: Drones and the Media in Critical Perspective”. The conference was funded by a grant from the Bank of Sweden Tercentenary Foundation. After the conference a special issue of the journal Media & Communication was published in 2020, on the topic of drones in journalism.

In November 2020, Maria Karlsson (EV) and I received a grant from The Swedish Research Council for the project “True Crime on the Air. The Representation of Crime, the Law, and the Justice System in Swedish Public Service Radio’s P3 Documentary”. The research project will start in September 2021 and run to 2023. The question “How does true crime, aimed at a young audience, depict crime, the law and the justice system?” is the starting point for the project, which will analyze approximately 180 crime documentaries, aired between 2005–2020.

Another area of interest is rural public spheres in a shifting media environment in a globalizing world. From the outside urban viewpoint life in “the rural” is often characterized as vulnerable (e.g. lacking infrastructure, culture, jobs and opportunities) while from the inside it is sometimes understood as autonomous. One central question in this project concerns the tensions and differences between internal first person views (of e.g. local newspaper reporters and readers) and external third person views (of e.g. politicians and researchers) on “the local” and “the rural”.